My Multipotentialite Musings lead me down rabbit holes sometimes, and I love every second of it!

One night, I came across a documentary on PBS. I missed the beginning but from the sales pitches dispersed throughout, I realized they were attempting to sell DVD copies of the documentary being showed. I was captivated by the content and dropped everything to stay up watching.  The scenes were of a man going about his day in the Alaskan wilderness. This included him building a cabin, looking for food, canoeing down a nearby lake, and enjoying nature. Each scene was personalized with narration from his first-person perspective. 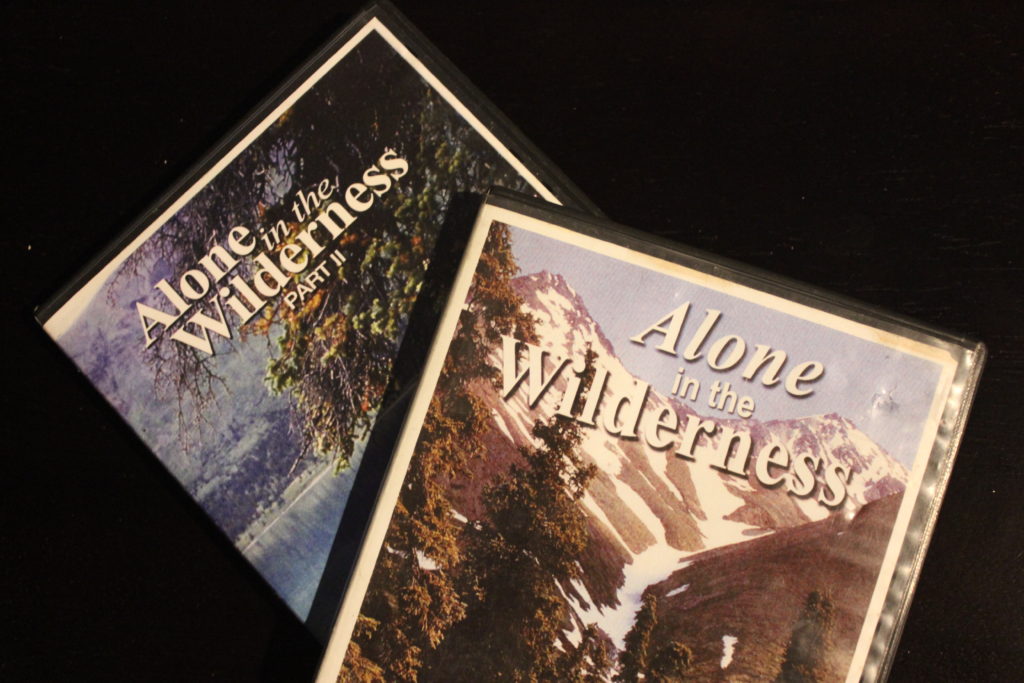 The story was moving – innocent, pure, and simple. The man was a skillful craftsman, and I was amazed watching him use the resources available to him, create his own utensils and make the most of each day. I was intrigued by the filming and narration and wanted to know if he coordinated everything himself.

Once the documentary ended, I did some research. I also put the 2-part DVD of Alone in the Wilderness on hold at my local library. The library description read:

To live in a pristine land unchanged by man…to roam a wilderness through which few other humans have passed…to choose an idyllic site, cut trees and build a log cabin…to be a self-sufficient craftsman, making what is needed from materials available…to be not at odds with the world but content with one’s own thoughts and company.

Thousands have had such dreams, but Richard Proenneke lived them. He found a place, built a cabin, and stayed to become part of the country.

I went to the library to pick up the DVDs once they were ready.  Coincidentally, the person at the check-out desk realized another woman had just taken them off the Hold shelves to send them back since the library only keeps items on Hold for a certain period. I had arrived just in time! I took that as a sign that I needed to see this documentary and it was meant to be!

I watched the first DVD from the beginning which helped me put the missing pieces together.  The narrated introduction from Dick’s perspective helped set the scene:

It was good to be back in the wilderness again where everything seemed apeace. I was alone, just me and the animals. It was a great feeling – free once more to plan and do as I please. Beyond was all around me. My dream was a dream no longer. I suppose I was here because this was something I had to do, not just dream about it, but do it. I suppose, too, I was here to test myself. Not that I had never done it before but this time it was to be a more thorough one lasting examination. What was I capable of that I didn’t know yet? Could I truly enjoy my own company for an entire year? And was I equal to everything this wild land could throw at me? I had seen its moods in late spring, summer and early fall but what about the winter? Would I love the isolation then? With its bone-stabbing cold? Its ghostly silence? At age 51, I intended to find out.

It was in the late spring of 1968 that Dick Proenneke decided to live civilization behind to live in a pristine land yet unchanged by man and to roam a wilderness through which few other humans have passed while carving out a new life in this remote valley known as Twin Lakes. Dick would not only keep daily journals but would film his Alaskan odyssey with the help of tripod-mounted camera.

Once again, I gave the documentary my full attention. I was impressed by Dick’s foresight to film, take pictures and maintain a journal given the logistics in his time. In the second DVD, the many rolls of film, diligently labeled to make it all happen, were featured.  I had a lot of questions about his process.  Since the narration matched the scenes so perfectly, how did he coordinate it all? Did he film and then write in his journal about the day’s events? Was the narration drafted to match the scenes? Or was the narrator reading Dick’s actual journal entries? The narration was peaceful and calming, matching the scenes of the Alaskan wilderness perfectly.

I was fascinated throughout. I loved watching Dick cut the wood to make them fit together for his cabin, make all his utensils, repurpose his tins, create sleds to transport food and other things, assemble the pieces of his elevated food storage on the ground prior to carrying them up a ladder for the final build, carry a huge log on his back with a strap he designed to make it easier, watch the animals for hours while respecting their space and without bothering them, climb into a bear hole, make biscuits in his tin pan, place his “souvenirs” on his mantel and make do with what he had.

I was drawn to his simplicity, freedom, the beauty of his experience, his closeness to nature, and his creativity. His dry humor made me chuckle.  In a story about his friend, he said his friend had a good memory but it wasn’t very long!  I wish I could have been there with him – to walk around, explore this vast, quiet space, make things, truly take in the majestic surrounds, have time at my disposal… I was inspired seeing possibilities become real through his journey. 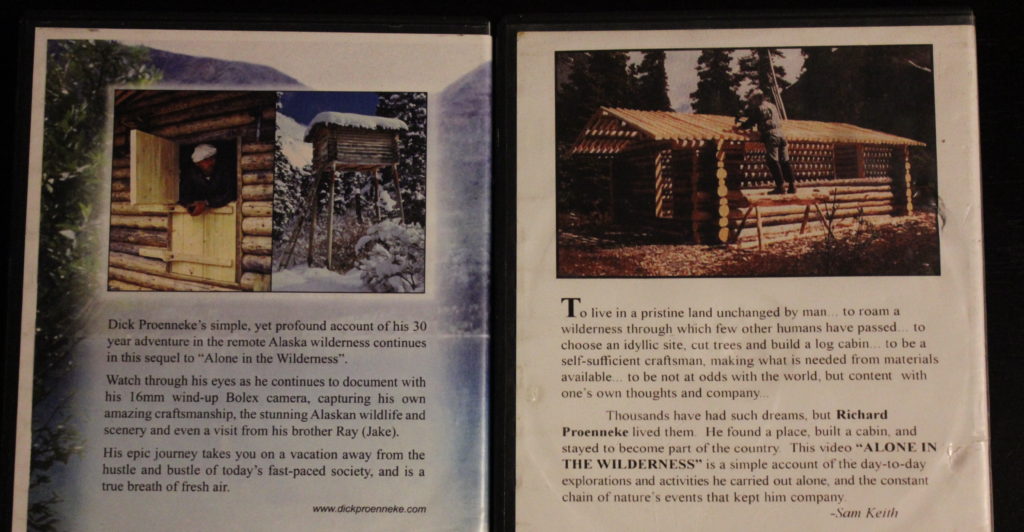 Dick seemed to have “busy” days… Busy in the sense that he had things to do, but unlike the traditional sense of busy, these were meaningful things that he intentionally lined up for himself. He had the discipline to follow through on his plan for the day, but had the leisure to switch things up if he wanted. That flexibility is beautiful. His purposeful days were simple and calm. Dick was comfortable, in his element and doing his thing.

I was mesmerized watching Dick complete his projects – what a beautiful human experience to be part of someone doing things they love! I feel like nature has all the answers – inside us and around us in the outdoors.  Dick tried to use what was available to him as much as possible so I was amused when he was hard on himself for using polyurethane on the cabin roof, but he admitted it would keep the roof from leaking. I love how elaborate his meals were; he didn’t have to compromise just because he’s out in the wild. He still had bread and a good stew with lots of seasoning! I was so happy for him when he said he was proud of finishing the storage cabin and the camera panned out for a view of the two cabins he built. What a satisfying accomplishment!

There were so many positive reminds in this documentary! First, you don’t need a lot to have it all. And if you’re good with that, that’s all that matters. Also, our creativity and ability as humans is limitless! In Dick’s own words:

It is always a pleasure to see what you can make instead of buying it ready-made.

This document is relevant to everything, all of life. How we live, how we view what’s possible, how we challenge the status quo, how we define our own path and pursue our dreams, how we prioritize what’s important…  It made me feel happy, calm, peaceful, appreciative, attentive, creative, hopeful, connected, alive, inspired, moved… It also reminded me of Vincent van Gogh, especially his relationship with his brother. Dick and his brother also had a close relationship and wrote letters to each other throughout their life! Van Gogh also loved nature, paid attention to all the details and absorbed as much of it as he could. He also left us with his “studies” of nature.

I think this documentary can shed light on each of our purpose and the meaning of life. I’m so glad Dick documented his journey so others could enjoy it and learn from it.  What a blessing it is to be inspired to do things differently, do more, be more mindful, and live in a more meaningful way!

How about you? Have you heard about Dick Proenneke? Have you seen the documentary or read the book? If so, did it inspire you?  What other bodies of work have inspired you to live a meaningful and purposeful life? I’d love to hear your perspective below!

Dasanj Aberdeen is an entrepreneurial spirit who embodies the combination of left-brain logic and right-brain creativity. She is a consultant and proponent of multidisciplinary education, approaches and pursuits. She writes about their benefits in modern times and integrating multiple interests into a sustainable and fulfilling lifestyle. She’s a graduate of The Wharton School of the University of Pennsylvania and Temple University with a concentration in Technology & Innovation Management, jointly delivered by the Fox School of Business and College of Engineering.